1972 was not a good year for air travel. After D. B. Cooper hijacked a US flight and collected a ransom, there were about 15 copycat hijackings.

You may have heard of the Whigs, but what about other political parties in the history of the US?  To be fair, some of these were pretty out there and unpopular, but the names are interesting anyway.  Surprisingly, there’s no Pity Party.

Vanessa and I were talking about how some mangoes we got are stinging our tongue a bit.  Why?  Who knows?  (I don’t plan to stop eating the tasty things, whatever the case.)  Anyway, this reminded me of the tales of the poisonous fugu (a type of pufferfish) that slightly stings the tongue when you eat it.  Fugu is a Japanese delicacy that must be expertly prepared by a specially licensed chef or else it may poison you.  The poison works by leaving you paralyzed, but conscious.  In 1975, a famous kabuki actor died after eating 4 servings of the liver, which is the most poisonous part…even after being warned about it by the chef.  Occasionally, deaths still happen from it when people catch one and attempt to prepare it themselves without knowing what they’re doing.

Apparently, it’s illegal in Oregon and New Jersey for you to put gas into your own vehicle.  Someone from the station has to do it for you.  Voters in Oregon had a chance to vote this ridiculous law down in 1982 and…they kept it.  What?

As we get into the second half of summer, please remember not to wear your straw hat past the socially acceptable date of September 15th.  We don’t want another riot over this.

Before smallpox vaccine was invented in 1796, they did inoculation where they’d actually give you live smallpox through the skin.  You usually got a milder version of smallpox but your chances of dying went from 30% (getting smallpox naturally) down to 1-2%.  A scary choice to make, I’m sure.

I was thinking about the electoral college and the possibility of an elector voting for someone other than they person they were supposed to vote for.  They’re apparently called faithless electors.  Many states have laws that would punish faithless electors, although they’ve never had to enforce them.  It has happened from time to time.  In 2000, one of them voted for nobody “in protest of DC’s lack of representation in congress”.  In 2004, one of them accidentally voted for John Ewards [sic].

This weekend, we went on a little trip to southern New Mexico in the Deming area.

We went on the tour of a ghost town, Shakespeare, NM.  It was named by an English miner who even called a couple of streets Stratford and Avon.  Buildings were small back then.  At one point, a guy tried to start a boom there by planting gems out in the desert.  People became suspicious when they found gems that wouldn’t be found in the area.

We also went to see City of Rocks…a bunch of tall rocks out in the middle of the desert.  Great place for hide-and-seek.

On the way back, we dropped by Elephant Butte lake and went swimming a little.  The water was great, once you got used to it.  If you’re taking a 2-wheel drive vehicle there, avoid the sand at all costs!  We got stuck a couple of times and I’m paranoid of driving through anything that looks like sand now.  Sadly, the main beach area is mainly crowded with huge RVs that take up as much space as possible.  Are all lakes like that?

Ravens are kept at the tower of London.  One of the Beefeaters cares for them.  Beefeaters are guards who wear a kind of kilt with pants as well as an odd top hat.  This reminds me of our American tradition where we have rabid badgers guarding the top of the statue of liberty who are tended by former NFL football champions.  Oh wait.  No we don’t. 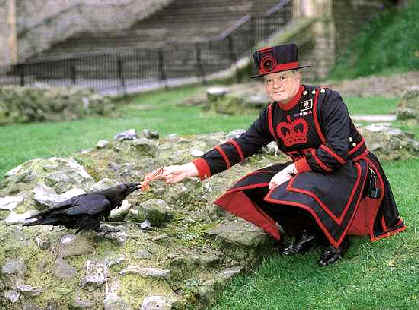 We watched the Oliver! musical on Netflix.  I looked up gruel.  It’s basically Malt-O-Meal if you’ve ever had that…a thin hot wheat-based soupy stuff.  Porridge is a thicker version of gruel.  I like Malt-O-Meal with butter and sugar, but I’m guessing Oliver didn’t get any of those in the orphanage/workhouse.  Come to think of it, my kids have never had malt-o-meal.  Time to let them try it.  And if they ask for more, they’ll have to talk to the administrators!