I was watching an old Orson Welles movie from 1958 called Touch of Evil. It featured the famous Mexican actor, Charlton Heston.

That reminds me of a funny thing I see…towns where the official town name pronunciation is incorrect.

The Leaning Tower of Pisa isn’t the only famous leaning building.  Another is the Capital Gate in Abu Dhabi (intentional).

The Leaning Tower of Suurhusen is in Germany (a result of rotting wood foundations, but was later stabilized).

Today we went to Meow Wolf House of Eternal Return. It’s a crazy art/sci fi mystery house in Santa Fe.  Some parts of it were very Santa Fe…overall, it was very interesting to go through…like seeing hundreds of quirky pieces of art and electronics put together with an overarching story.  My only recommendation is that if possible, don’t go on a weekend.  It was so crowded that we could barely move in many spots and could barely hear some very quiet audio cues in the story.  Here is a dramatic reenactment.

Oh, and pro-tip…be sure to look in the toilet.

We just went to Colorado Springs/Denver for a week.  Had a great time.  Helping to keep up on wi-fi security on the trip was Freedome…a VPN with a 2-week free trial…cause you don’t wanna connect directly to open wi-fi.

cog railway up to Pike’s Peak – rode a train all the way up to the top and found marmots, ice, and freezing winds…28 degrees in August

Cave of the Winds (warning: auto-playing video) – nice cave to tour through.  Paved and great for kids.  They have a terrifying ride where you can pay to swing out over a cliff…which we didn’t do for some reason.

Rocket Fizz (chain) – A neat soda/candy store with all the independent sodas and candies you can think of.  The clerk recommended the bug barf soda.  I chose something else.

Rosemount Museum – Late 1800s mansion in Pueblo built by a family that owned a bunch of banks.  Also, the locals pronounce their town as “Pieblo”….what?

Axum Ethiopian Restaurant – We got a bunch o’ stuff and enjoyed it.

Elitch Gardens – big amusement park…fun for kids and all

The Wizard’s Chest – Great geek store with board games, figurines, toys, and costumes.  It was like being inside Amazon.

Museum of Nature and Science – A museum so big that we unfortunately didn’t even have time to see it all.  We saw the new mythical creatures exhibit.  I can picture the pride-swallowing that had to happen to have exhibits of made-up creatures just to get peoples’ attention.  It was fun for kids anyway.  We also saw an entire exhibit on poison.  That was different.

Ikea – Vanessa finally got to visit an Ikea.  I recently got The Stanley Parable…a PC game…I think it might actually be an Ikea simulator…endless rooms in various configurations.  The kids were getting kinda bored, but did enjoy the Swedish desserts in the cafeteria at the end.

Casa Bonita – Can’t go to Denver without going to the famous Mexican restaurant with cliff divers.  The food is bad so we just got nachos…but hey…cliff divers in a restaurant.

We recently went to visit Vanessa’s brother in the Galveston, TX area.  We spent a lot of time in the nice warm ocean water.  Always a joy.  Galveston is a long, thin island with beach house after beach house on stilts.  We went to Moody Gardens and saw a sloth, vampire bats, and some neat plants.  I also got to do the zip line…High up some stairs, they have an obstacle course where you can face your fear of heights while safely secured to a rope on tracks that follow you around.  We got to go to the NASA space center and see some huge rockets and some pretty cool exhibits.  Your face apparently turns red in zero gravity, from some videos we watched.  Vanessa’s brother has a DJI Phantom drone that he flew around for us.  He even had some goggles so that we could see what the drone saw.  Amazing stuff.  He also got Bluetooth-controlled paper airplanes with a propeller and rudder that you control from your cellphone…great idea.  We’ll have to experiment further to get them working.  As far as Texas in general, we saw a lot of cowboy churches, which I’d never heard of.  We ate at Braum’s because I heard it was good.  Can’t recommend it.  We also stopped at Dyers BBQ in Amarillo, which was pretty good.

Recently, while staying at a hotel in northern Texas, I saw many people wearing cowboy hats.  I even saw a guy wearing spurs.  Surely, I thought, they can’t fit the stereotype this well.  Then I remembered there’s some big rodeo event going on in the area.

We had a “staycation” last week.  We went camping high in the mountains near Santa Fe.  Camping up there was cooold, and we could have prepared better…but you don’t actually expect to sleep when camping.  We also toured a bit around Santa Fe.  There was a small labyrinth outside a cathedral there.  Of course, we had to stop by our favorite restaurant in Santa Fe, Tomasitas.  We noticed there was a new African style place called Jambo Cafe, but we neglected to try it…maybe next time.    We dropped by the Chuck Jones gallery.  Was he in New Mexico at some point?  Vanessa got to visit the Georgia O’Keefe museum that she’d wanted to see for a while.  On the way home from Santa Fe, we stopped by Tent Rock and Cochiti Lake.

We went to Cliff’s one day and had fun.  It’s a small amusement park here in Albuquerque.  It was fun aside from Sean having an “nausea incident” on the way home as a result of riding a looping ride 3 times before he left.  Loading up on greek food at the new Ahmo’s Deli probably didn’t help.

Later in the week, we went to my cousin’s wedding in Clovis and had a good time seeing cousins I hadn’t seen in quite a while.  We also played Love Letters.  It’s a cool little rule-based card game with only 16 cards.  Very simple to learn.

Dubai City is a poorly thought-out city in the Middle East.  It has amazing growth and the tallest building in the world, but they didn’t quite think it through.  They forgot to put in enough sewers.  So mile after mile of sewage trucks line up on the highway for sewage transport.  It’s the epitome of quick and dirty. 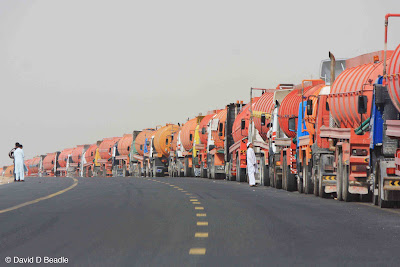 Check out the Aircraft Boneyard in Google Maps.  It’s in Tucscon.  Be sure to zoom in and pan around.

I thought it was funny that the Subway restaurant billboards in Texas didn’t have pictures of healthy sandwiches as many places do.  Instead, they had giant sandwiches with slabs of pulled pork BBQ.